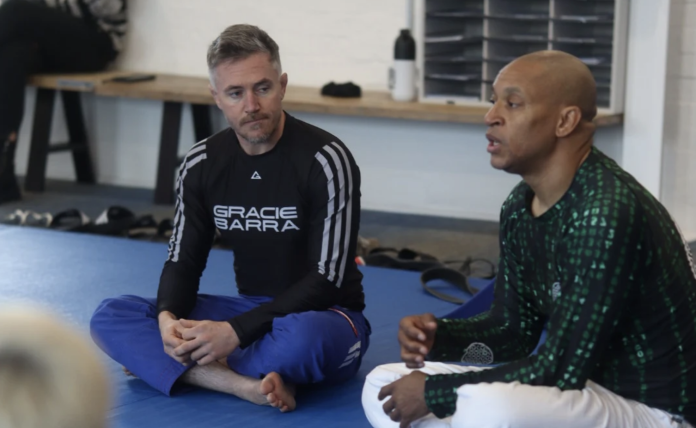 Professor Mike Bates, head instructor at Gracie Barra Roundhay Leeds in the UK is one of the most interesting men I have ever met. This guy left a solid successful job working counter-terrorism for the UK government to run a jiu-jitsu gym. Beyond that, he founded a charity The Atlantic Grappler Prof. Mike’s charity has a unique goal. He is going to row a boat across the Atlantic ocean this November. So far he has raised more than 100,000 pounds (that’s like 200k in dollars) for the pediatric hospital in Leeds. Just last week he raised another 32,000 pounds for the charity. It is impressive, to say the least.

Professor Mike also runs a great podcast with Tiernan De Souza with some of the biggest names in the game (like this one featuring Kurt Osoander). Beyond the big names though they host discussions and share research about the impact jiu-jitsu is having on society, especially with kids and young women champions like Kendall Reusing.

Fight philanthropy is when martial artist uses their skill to enrich the community at large. Prof. Mike Bates embodies this ideal. I talked with him recently about his journey in BJJ and what it has been like pushing this campaign inside and outside the BJJ world.

“I think, you know, any, any great instructor is a great inspiration to their students. We’re in the people development game and jujitsu is the tool we use to develop people. So it’s broader than just the collection techniques. It’s about bringing people together to form strong communities and tribes, and then, you know, that tribe needs a leader.  It needs people to go out and find new stuff and to share their experiences. So that’s at the heart of what I do. It is what I’ve always done, always served. My latest venture is to roll solar across the Atlantic, this December. So under 200 days to go. Um, and of course, you know, with any great feat like that, you need a really strong motivation, which I’ve got very deep.

Prof Mike was in the Royal Marines and one of the UK soldiers appointed to hunt Bin Laden. It was during those training sessions that questions like “That was the mission. Basically like go find bin Laden. So we went to the Tora bora region of Afghanistan. We were the first conventional, British troops to go in early 2002. And when we were gearing up for this and getting ready to go, we were like, “Man, what happens if like, I don’t know- we like are in one of these caves and you can’t use your weapon? We better know what we’re doing. “

That was the start of his journey toward jiu-jitsu. He was soaking up any and all seminars (he took one with Erik Paulson in Aberdeen Scotland!) and DVD action he could find. While tailing terrorists in Leeds, he spotted an MMA gym and made a note of it. Then he returned.

In 2000 he got his black belt under the world renown Victor Estima. He opened his own school, Gracie Barra Roundhay Leeds in 2020- just when the pandemic kicked off. It was a trying time (the lockdown kicked in, gyms were shut and a lot places closed for good) but Mike stayed the course. How are they doing you ask? “We’ve got 432 students on the books” he says affirmatively.

in 2011 started 2009, 2010 had my first song. He was five weeks premature. I had to feed him through a tube, but it was pretty good. You know, he was in the hospital for six weeks, came out, was fine. And then year after my youngest son was born, he was, uh, 11 weeks premature. Ge was three pounds, see-through, and on a  ventilator immediately in intensive care. So he couldn’t breathe for himself. Then we got him into special care, so in intensive care, we weren’t allowed to hold him.

He was forever grateful to the doctors and nurses who kept his sons alive. The equipment there needed is extremely expensive and hard to find. He tells me in a somber tone that “the specialist equipment that a young baby needs to survive is purchased by charities. So a twins incubator would cost 35,000 pounds, $50,000. Right?”

That got him thinking of how to help more families who need this kind of care for their babies. ”So ultimately what I wanted to do was raise a tangible amount of money, which could make a real difference and save some baby’s lives. How am I gonna raise a massive amount of money? You have to do something massive. You have to find something that people are gonna go, “You’re doing what?”

When he first pitched the idea to his wife- she said no. Rather than argue Mike took freezing cold showers for a month. He brought his case back to her and she supported it to the fullest.

After working a very secure job in British intelligence he walked away from it all, to open the school and row the Atlantic to help families he may never meet. It is deeply moving to see the conviction he works and speaks with.

Well, here’s the thing. And it’s, it, it, it might not be the answer that you want, but it’s the truth. You know, the Jisu community hasn’t stepped up and helped, you know, Gracie Barra, they’ve talked about it, but they’ve not done anything. Yeah. The people who have helped are the other people like me who go against the grain and are prepared to step out and make the change happen. Right. Right. So for instance, Braulio [Estima the jiu-jitsu legend]. Braulio just stepped straight up. He said, “Man, let’s organize it. I’m gonna come to a place. We’ll do a seminar for free. All the proceeds go to charity. We raised like $5,000.00 kind of thing.”

Prof. Mike says while certain people and orgs in BJJ have helped, really it’s just people with like hearts coming together for a cause beyond themselves.

“We agreed to that on WhatsApp call and some messages. I met him at the ReOrg charity event. Victor, my professor, exactly the same. “Let’s jump on a call. Let’s show what you’re doing. I want to help. I’m gonna come later in the year.” Then I got introduced to Tom Callos [BJJ culture shifter and artist]. So it’s not the community at large. It is again, people who think more about the benefit of others than they think of themselves. Those are the true leaders.”

Adisa Banjoko is a BJJ black belt who teaches at Ralph Gracie San Jose and the USF Jiu-jitsu Club. He also hosts Bishop Chronicles Podcast on stoic philosophy. Follow him @bishopchronicles on IG or TikTok.